Our founder Joe Phelps had remarkable foresight. Today, we farm 11 vineyards in the acclaimed AVAs of Napa Valley and the western Sonoma Coast. Both sites are run by full-time staff, some of whom have worked for the winery for over 40 years. 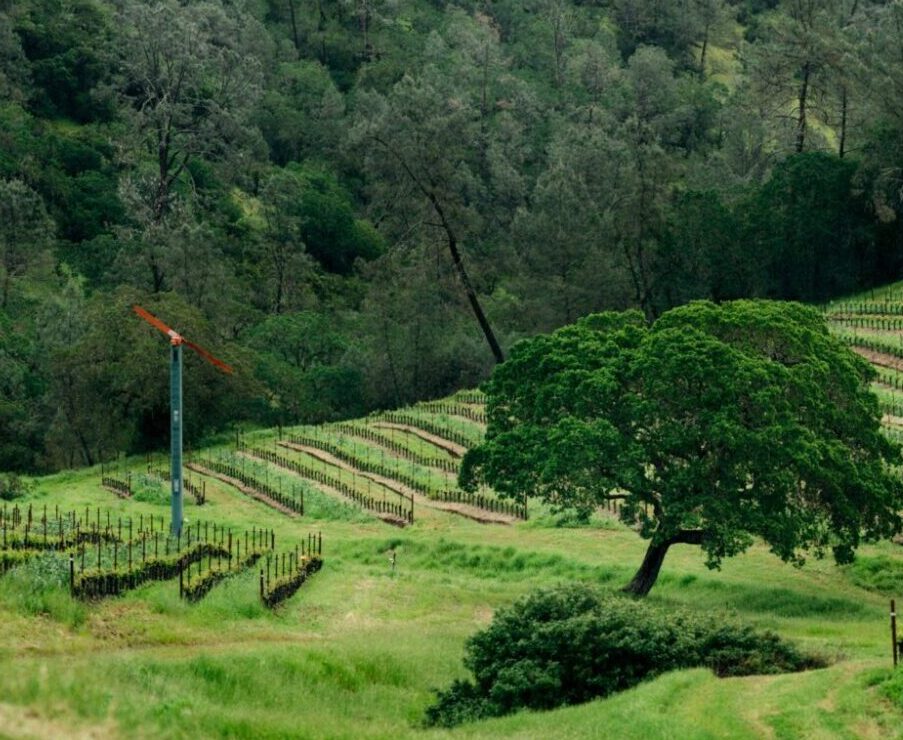 “Not a grape on the property. Lots of nice-looking cattle.”

That’s how Joe Phelps recollected his first encounter with the Napa Valley property that would become the home of Joseph Phelps Vineyards. It was well over 600 acres, more land than he originally intended to develop, but when he saw it, he fell in love. Its oak-studded hills and golden valleys spoke to the Colorado-bred farm boy in him. Joe had been looking for a place to make a little wine. Since his years in the Navy, he’d grown his father’s Greeley, Colorado-based construction business into a multi-state powerhouse, expanding to northern California in the mid-1960s to work on bridge and dam projects and the infrastructure for BART. Wine was a fast-growing side interest, something he’d developed a taste for in college. He began collecting, and even did some home winemaking in Greeley using grapes shipped by air overnight from Napa Valley.

In time, Joe’s work in California and his interest in wine merged, leading to connections with growers and winemakers in Napa Valley and a contract to build the Souverain Winery. It wasn’t long before the idea of starting his own winery took hold. A trip to Italy in 1970 clinched it, and Joe began looking for property in Napa Valley.

On March 1, 1973 Joe took possession of the 600-acre cattle ranch on the east side of St. Helena. He wasted no time, laying out and planting 100 acres of vineyards with the help of founding winemaker Walter Schug. They planted everything: Cabernet Sauvignon, Zinfandel, Johannisberg Riesling, Gewurztraminer. The property was a blank slate, and Joe was willing to try anything.

Joe oversaw the building of the winery, a feat accomplished in time for the 1974 harvest. Designed by architect John Marsh Davis and built by Joe’s firm, Hensel Phelps Construction Company, the redwood building featured a fermentation and aging room, a bottling area, and a few offices. Joe’s son, Bill, worked on the construction crew during a college summer break. His daughter, Leslie, helped with bookkeeping, payroll, and taxes for a few years. She recalls there was no tasting room at first; retail sales were handled out of the Dutch door to the reception area.

Over the next four decades Joe ran his namesake winery with vision, an unwavering commitment to quality and a strong taste for innovation. In 1974 he produced California’s first varietally-labeled Syrah, a wine fashioned after the Côte Rotie and Hermitage wines he admired and collected. He was one of the first California vintners to embrace Rhone-style wines, experimenting with Viognier and creating Rhone blends that were most certainly ahead of their time.

Also, in 1974 Joe created what is arguably his most important legacy: California’s very first proprietary red Bordeaux-style blend – Insignia. His idea, to blend the finest wine lots of the vintage into one bottling, was revolutionary for its time, though it was a model quickly adopted by other prominent Napa Valley producers. The wine brought recognition not only to Joseph Phelps Vineyards, but ultimately to Napa Valley as a whole. 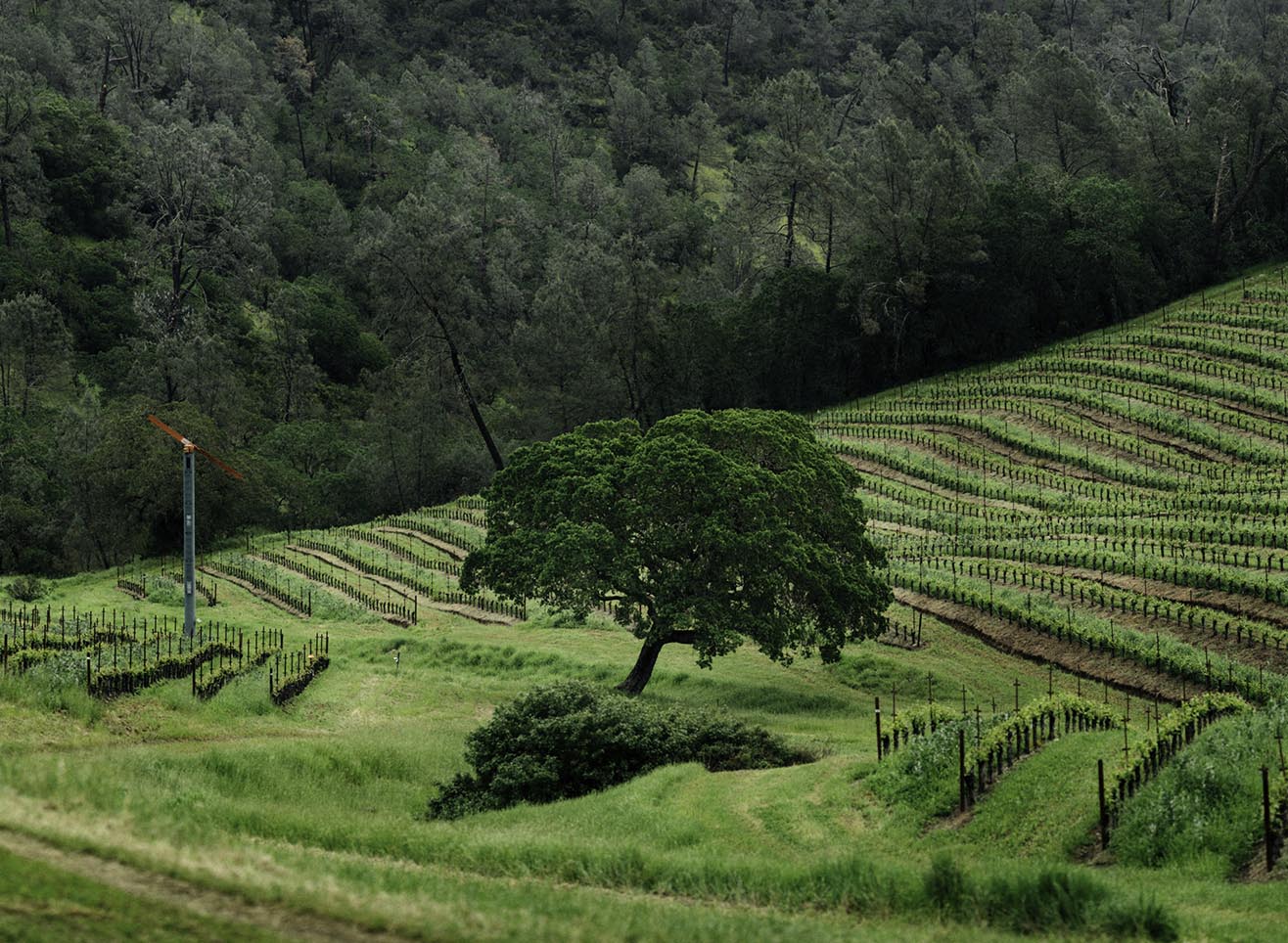 Joseph Phelps Vineyards owns and farms some 425 acres of vines in Napa Valley on nine estate vineyards in St. Helena, Rutherford, Oakville, Stags Leap District, Oak Knoll District, South Napa and Carneros. Strategically chosen over many decades, each vineyard has its own personality and brings a different characteristic to the wines.

The Home Ranch in St. Helena that Joe fell in love with so many years ago features 130 acres of wine grapes, olive orchards, fruit trees, and a hillside winery offering incomparable hospitality and panoramic vineyard views. Joe also donated a conservation easement over most of the Home Ranch to the Land Trust of Napa County in 1999. As a result of this gift, hundreds of acres of Napa Valley will forever be preserved as open space. The legacy of Joseph Phelps Vineyards continues as one of Napa Valley’s preeminent wine estates.

“People said the region was too cold, too wet, too windy for grapes.”

In the mid-1990s the Phelps family renewed a quest to find a suitable place to grow Pinot Noir and Chardonnay. Joseph Phelps Vineyards had a long history with both varieties, producing a Napa Valley Pinot Noir from 1973-1983, and Chardonnays from Napa Valley and Carneros, starting in 1974. But Joe had never been entirely satisfied with the results. A search for vineyards led further West to the town of Freestone on the Sonoma Coast, where few vineyards existed in the late 1990’s. In 1999, land in Freestone was purchased for vineyards and a winemaking facility. +Better known for cattle, pasture and forest land, the region – just eight miles from the Pacific Ocean – was socked in by fog that lingered into the early afternoon on most summer days. For grapes, this cool area was relatively untested. But with its Goldridge soils and rumored potential for both Pinot Noir and Chardonnay, it was a region that Joe wanted to explore.

As in Napa Valley so many years ago, pastures were turned into vineyards. The Pastorale Vineyard, a former dairy farm, was planted to Pinot Noir and Chardonnay vines in 2000. When another property just down the road became available the same year, it too was added to the portfolio, and the Quarter Moon Vineyard was planted entirely to Pinot Noir in 2001. Joe’s vision of one day producing a Pinot Noir to stand side by side with the French Burgundies he so admired was taking shape. But as in Napa Valley, the ground had yet to be proven.

The challenge of farming wine grapes on the Sonoma Coast became rapidly apparent, and as in Napa Valley, the first years involved a learning curve as steep as the hillsides on which vines were planted. The environment, climate and soils were utterly different from Napa, and after the first growing seasons several vineyard blocks were grafted over to more favorable clones. Additionally, the team adjusted trellising, pruning and canopy management techniques. It took the winery five years to bring in its first crop.

As in Napa, Joe knew that building a winery near the vineyards in Freestone was imperative for maintaining quality. Completed in 2007, a dedicated winemaking facility was built by Hensel Phelps Construction Company as a favor to Joe and a nod to the past. With the Pastorale Vineyard rising steeply above it, the three-story building of redwood and steel is designed so that grapes and wines can be moved by gravity, an ideal way of gently working with thin-skinned Pinot Noir.

In 2015, the winery’s first sparkling wine was produced using Chardonnay and Pinot Noir from the Pastorale Vineyard estate called Ovation, to honor the extraordinary life of Joe Phelps. In 2018, singular block and clonal expression wines from both the Quarter Moon and Pastorale Vineyards were also introduced. These new wines called Proem, are the beginning of a new and distinctive story to tell about our Freestone estate.

Since those first few vintages the reputation of Joseph Phelps’ Sonoma Coast wines have grown in tandem with the stature of the growing region itself. Today, dozens of vineyards share the landscape with dense forests and open pastures, and some of California’s most respected Pinot Noir producers source grapes in this sparsely populated but burgeoning winegrowing region. Joe’s fearlessness and infectious vision – his willingness to put a stake in the ground – proved once again to be prescient. 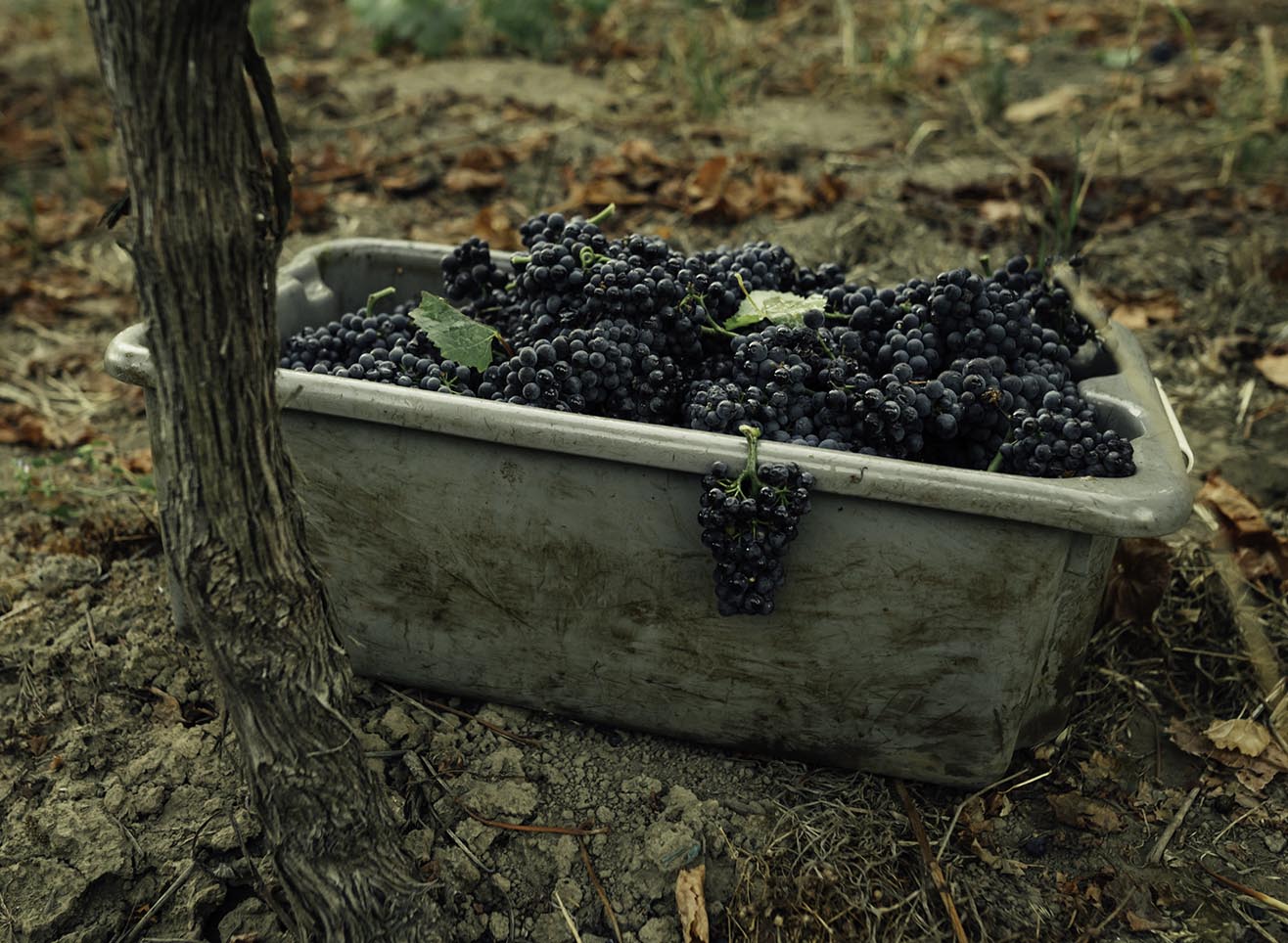 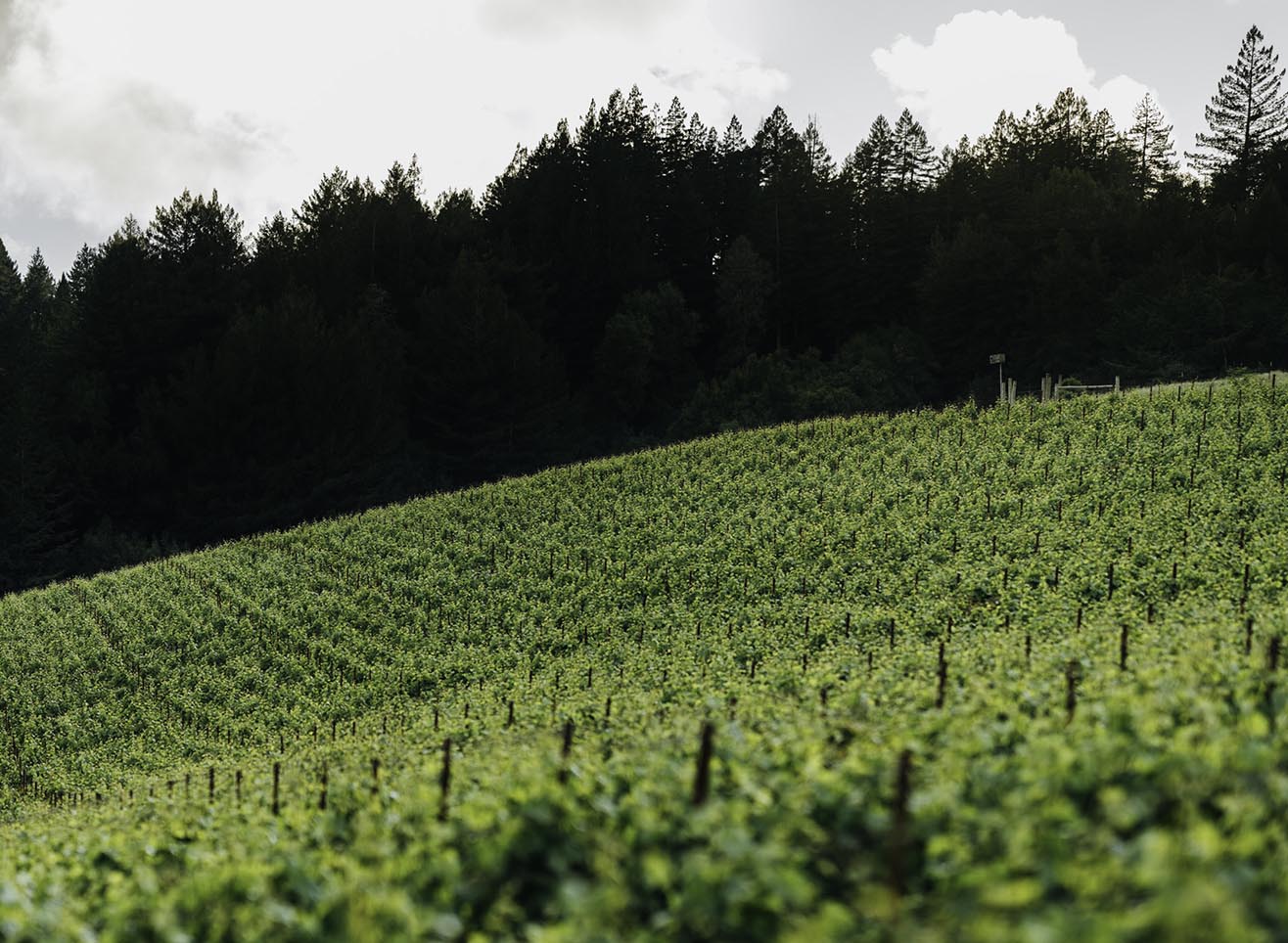